Surviving and Thriving Through Covid-19 with Dentrix Ascend

The onset of COVID-19 in March of 2020 upended thousands of small dental practices around the United States almost overnight. As practices closed their doors in response to lockdown orders, there were no blueprints or established guidelines for how to endure the shutdown, stay connected to patients, or deal with dozens of new COVID protocols and restrictions. As Bell Family Dentistry—a practice in Riverbank, California—faced these unprecedented changes, they quickly came to view Dentrix Ascend as not just an important resource, but an essential lifeline for successfully navigating through and beyond the pandemic.

Moving Home Without Skipping a Beat

“We received the order to shut down on March 16th,” recalled Amanda Bell, the business manager for Bell Family Dentistry. “At that point, there were so many things to take care of—from cancelling dozens of appointments and managing staff furloughs to applying for PPP loans and restructuring our finances. Plus, we were still receiving insurance payments from work we’d done earlier. Since our Dentrix Ascend system is cloud-based, I was able to access and take care of all of those things from home without skipping a beat. And Dentrix Ascend’s great scheduling tools and automated appointment notifications saved me countless hours as I worked to cancel and reschedule all of our routine care appointments from my home office.”

This work from home dynamic quickly expanded as the practice’s solo dentist (and Amanda’s husband) Dr. Brent Bell started returning to the office to perform emergency procedures. “Throughout the shutdown, we received lots of calls from patients with emergency dental needs,” Dr. Bell explained. “I would go into the office by myself to perform those procedures, and Amanda would schedule the appointments and manage the treatment plans from home. We never could have done that with our old practice management system. We also signed up for Dentrix Ascend’s ePrescribe service, which was another lifesaver during the shutdown.”

In the wake of COVID-19, Dentrix Ascend allowed Bell Family Dentistry to:

Transitioning and Adapting to a New Normal

As Bell Family Dentistry prepared to reopen and begin seeing non-emergency patients in mid-May, Dentrix Ascend took on an even more essential role in helping the staff adapt quickly to new COVID requirements and restrictions.

“The day we came back, we had a two-month backlog of cleaning patients to deal with,” Amanda said. “With Dentrix Ascend’s scheduling capabilities, we were able to quickly reschedule them for the same time and day of the week as their previous appointment over the next six months, send everyone text notifications, and then use the pinboard to move those appointments around as needed. Trying to manage all that with our old scheduling software would have been a nightmare.”

Dentrix Ascend also provided Amanda and her team with the tools they needed to adapt to a very different daily routine. “There are so many great tools and capabilities in Dentrix Ascend that have become even more essential since we re-opened,” she said. “We added our COVID protocols to our automated reminders, so every patient knows what to expect when they visit our office. We use the Dentrix Ascend routing panel to make sure patients stay appropriately spaced and move quickly through our office, so they never have to sit in a crowded waiting room. We even created a special chart note template with all of our COVID protocols and questions, so we can check those off and stamp that information directly into our chart notes. And with the ongoing uncertainty, we depend on Dentrix Ascend’s ASAP list more than ever to keep our schedule as full as COVID guidelines permit.”

“I can honestly say that I don’t know how we would have gotten through it all without Dentrix Ascend.”

Ready to Thrive in 2021 and Beyond

Bell Family Dentistry’s approach to Dentrix Ascend has put them in the best possible position to adapt and succeed in the current situation. “We first discovered Dentrix Ascend at an ADA convention in 2017,” Dr. Bell explained. “I’m a visual person, so I was initially drawn to its clean and modern interface. But when we switched to Dentrix Ascend in 2018, Amanda and I were determined to learn everything about it and take full advantage of everything it has to offer.”

“We reconfigured a lot of our systems and routines to work with Dentrix Ascend,” Amanda continued, “and we’ve found that our new way of doing things is much more efficient than the old ways. Being open to growing and finding new and better ways to do things has really gone hand in hand with Dentrix Ascend—and it’s an approach that has been invaluable as we’ve navigated our way through 2020.”

Today, the practice is thriving—with all of its operatories fully booked out 4-5 weeks in advance. “It has been an exhausting year for everyone,” Amanda said. “But we’ve learned a lot that will help us down the road. And I can honestly say that I don’t know how we would have gotten through it all without Dentrix Ascend.” 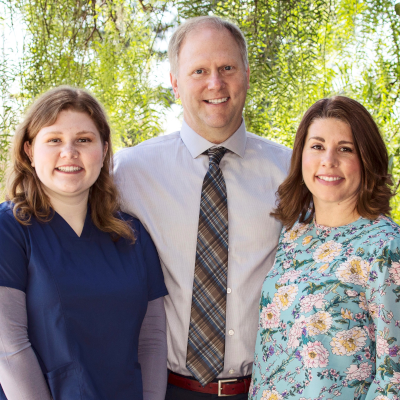