With Dentrix Ascend, Mac dentists can continue to use their Macs and receive the latest advancements in dental software and digital imaging—plus all of the benefits of cloud-based practice management. 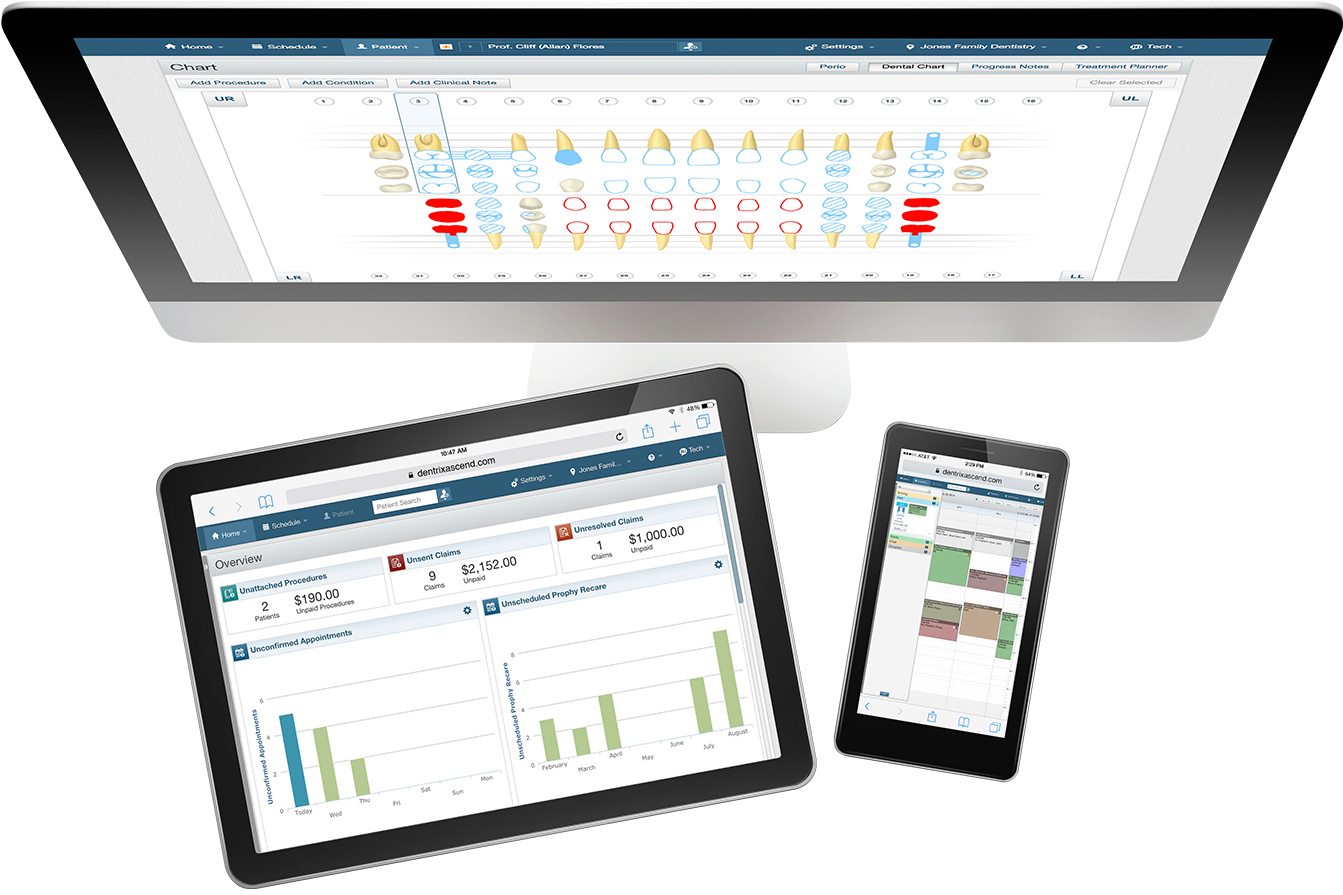 Learn how you can make a smooth transition from Viive to Dentrix Ascend, with minimal impact on your patients.

Since the market has shown that cloud-based software is the future of dental practice management, and dentists were not choosing its Mac-based solution, Henry Schein One discontinued the development and sale of Viive on August 31, 2018. Dentrix Ascend offers a smarter, more natural interface that’s easy to learn and master. With anytime, anywhere access to patient information and customized workflows, you’ll get more done in less time.

Mac dentists are choosing Dentrix Ascend because they can continue to use their Macs while gaining these benefits:

Why a Cloud-based Practice Management System is Better

Dentrix Ascend presents a better business choice, because you won’t have to worry about technical incompatibility. Your team can use Macs, Apple iPads, PCs and other devices with the latest Google Chrome browser.

In addition, you won’t have to worry about time-consuming IT tasks. Backups, software updates and data storage all happen automatically, in the cloud.

Also, Dentrix Ascend is easy to use. It delivers advanced business, practice management and clinical tools through a natural user interface. Similar to the clean simplicity of the Mac, you can move quickly from new user to expert, reaching full productivity quickly.

Why Move Forward with Dentrix Ascend?

With Dentrix Ascend, Viive customers will receive the latest advancements in dental software and digital imaging—plus all of the benefits of cloud-based practice management.

Imaging, charting, scheduling and billing can all be done inside Dentrix Ascend without having to install anything. One-click access to patient information and customized workflows for the team improve practice efficiency.

When the practice expands to multiple sites, Dentrix Ascend offers many advantages over server-based practice management solutions, such as a single patient record that shares all patient data, including diagnostic images, across all locations.

Talk to a Product Specialist

Henry Schein One is committed to helping each Viive customer make a smooth transition to Dentrix Ascend. Request a demo so we can discuss how we can help you get started.

Why did Henry Schein One choose not to continue developing Viive?

Since 2010, a greater number of Mac users opted for our cloud solution, Dentrix Ascend, than Viive, a native Mac software. Dentrix Ascend also has broader support for the entire Apple ecosystem, as it can run entirely on a Mac and on the Apple iPad. Given the market dynamics, Henry Schein One felt that the best solution for our Mac customers was to put all of our resources into Dentrix Ascend.

Will I be able to keep using Viive if I don’t want to go to another practice management system?

Viive customers have a perpetual use license and therefore are free to use it for as long as they wish. However, Henry Schein One no longer supported it after August 31, 2018, meaning that we no longer offer technical support or software updates.

As Apple has a history of upgrading Mac OS every year, it is likely that Viive could soon become incompatible with those upgrades. For this reason, we recommend that our customers stop using Viive when the support runs out.

Can I sell my Viive license?

Henry Schein One allows the transfer of software licenses as part of the sale of a dental practice. However, we don’t allow licenses to be sold outside of a practice transfer.

Are there any features in Viive that are missing in Dentrix Ascend?

What imaging solutions are available on Dentrix Ascend?

DEXIS for Dentrix Ascend is the preferred imaging solution for our Mac-based customers. Please refer to our website to see what other options you may have available for your practice.

Dentrix Ascend is designed to natively include electronic services, including reminders, claims, attachments, online booking and more. These services are included in your subscription. At this time, no outside services integrate with Dentrix Ascend.

Who should I contact if I need more information about Dentrix Ascend to be sure it will work for my office?

Please complete the form above to schedule a product demonstration with a product specialist.

Is there anything my office needs to do to be ready to convert to Dentrix Ascend?

There isn’t anything you will need to do with your software to be ready to convert Viive to Dentrix Ascend. Please complete the form above to schedule a product demonstration with a product specialist.